Will you dream doctor Clarke? 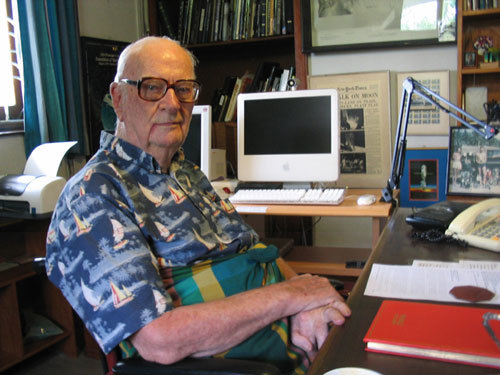 [quote]Hello ! This is Arthur Clarke, speaking to you from my home in Colombo, Sri Lanka.

As I approach my 90th birthday, my friends are asking how it feels like, to have completed 90 orbits around the Sun.

Of course, some things remind me that I have indeed qualified as a senior citizen. As Bob Hope once said : “You know you’re getting old, when the candles cost more than the cake !”

I’m now perfectly happy to step aside and watch how things evolve. But there’s also a sad side to living so long : most of my contemporaries and old friends have already departed. However, they have left behind many fond memories, for me to recall.

I now spend a good part of my day dreaming of times past, present and future. As I try to survive on 15 hours’ sleep a day, I have plenty of time to enjoy vivid dreams. Being completely wheel-chaired doesn’t stop my mind from roaming the universe - on the contrary !

In my time I’ve been very fortunate to see many of my dreams come true ! Growing up in the 1920s and 1930s, I never expected to see so much happen in the span of a few decades. We ’space cadets’ of the British Interplanetary Society spent all our spare time discussing space travel - but we didn’t imagine that it lay in our own near future…

I still can’t quite believe that we’ve just marked the 50th anniversary of the Space Age ! We’ve accomplished a great deal in that time, but the ’Golden Age of Space’ is only just beginning. After half a century of government-sponsore d efforts, we are now witnessing the emergence of commercial space flight.

Over the next 50 years, thousands of people will travel to Earth orbit - and then, to the Moon and beyond. Space travel - and space tourism - will one day become almost as commonplace as flying to exotic destinations on our own planet.

Things are also changing rapidly in many other areas of science and technology. To give just one example, the world’s mobile phone coverage recently passed 50 per cent — or 3.3 billion subscriptions. This was achieved in just a little over a quarter century since the first cellular network was set up. The mobile phone has revolutionized human communications, and is turning humanity into an endlessly chattering global family !

What does this mean for us as a species ?

Communication technologies are necessary, but not sufficient, for us humans to get along with each other. This is why we still have many disputes and conflicts in the world. Technology tools help us to gather and disseminate information, but we also need qualities like tolerance and compassion to achieve greater understanding between peoples and nations.

I have great faith in optimism as a guiding principle, if only because it offers us the opportunity of creating a self-fulfilling prophecy. So I hope we’ve learnt something from the most barbaric century in history - the 20th. I would like to see us overcome our tribal divisions and begin to think and act as if we were one family. That would be real globalisation…

As I complete 90 orbits, I have no regrets and no more personal ambitions. But if I may be allowed just three wishes, they would be these.

Firstly, I would like to see some evidence of extra-terrestrial life. I have always believed that we are not alone in the universe. But we are still waiting for ETs to call us - or give us some kind of a sign. We have no way of guessing when this might happen - I hope sooner rather than later !

Secondly, I would like to see us kick our current addiction to oil, and adopt clean energy sources. For over a decade, I’ve been monitoring various new energy experiments, but they have yet to produce commercial scale results. Climate change has now added a new sense of urgency. Our civilisation depends on energy, but we can’t allow oil and coal to slowly bake our planet…

The third wish is one closer to home. I’ve been living in Sri Lanka for 50 years - and half that time, I’ve been a sad witness to the bitter conflict that divides my adopted country.

I dearly wish to see lasting peace established in Sri Lanka as soon as possible. But I’m aware that peace cannot just be wished — it requires a great deal of hard work, courage and persistence.

I’m sometimes asked how I would like to be remembered. I’ve had a diverse career as a writer, underwater explorer, space promoter and science populariser. Of all these, I want to be remembered most as a writer - one who entertained readers, and, hopefully, stretched their imagination as well.

I find that another English writer — who, coincidentally, also spent most of his life in the East — has expressed it very well. So let me end with these words of Rudyard Kipling :

If I have given you delight

by aught that I have done.

Let me lie quiet in that night

which shall be yours anon ;

And for the little, little span

the dead are borne in mind,

seek not to question other than,

the books I leave behind.

This is Arthur Clarke, saying Thank You and Goodbye from Colombo ![/quote]